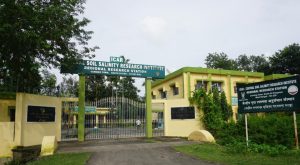 The Regional Research Station, Canning Town is located right on the climatically vulnerable coastal region of Ganges delta to cater the research and management needs of coastal salt affected soils. The research station is geographically situated at 22o15’N latitude and 88o40’E longitude is at about 46 km south –east of Kolkata. The station at canning Town was established in 1959 when it was under the administrative control of the then Central Rice Research Institute (CRRI), Cuttack. Later, after the establishment of CSSRI in 1969 the Research Station was brought under the aegis of CSSRI in 1970 as its Regional Research station. This station has developed several technologies for enhancement of agricultural (agriculture + fisheries) productivity under degraded (saline) coastal soils and poor water (saline) qualities. Some of these technologies are based on land shaping to alleviate the issues of water- logging and increased salinity of soil in coastal area. Several salt-tolerant crops/varieties and management practices have been developed/introduced for multiple and diversified cropping system in the mono cropped area. Agriculture aquaculture integrated farming system, improved techniques for increasing water use efficiency etc. have been developed which may be some of the key technologies for climate change adaptation. The station has a campus of an approximate area of 26 hectare of land on the bank of the estuarine river Matla. It has 3 adjacent units viz. Laboratory/ Office, residential quarters and experimental farm.

Regional Research Station, Canning Town has two main buildings units, one is for administrative offices and the other for modern research laboratory. Besides there are other buildings viz. Workshop, Stores, Meteorological Observatory, Glass House and residential quarters

Out of the total 26 hectare of land about 12 hectare is old experimental farm area and about 14 hectare is the new experimental farm area located on the silted bed of the estuarine river Matla flowing brackish water round the year. The farm is equipped with modern farm machineries and facilities like tractor, power-tillers and diesel engine pumps, electrical pumps, drip irrigation system and micro-sprinkler irrigation system, irrigation ponds, deep-tubewells, etc. 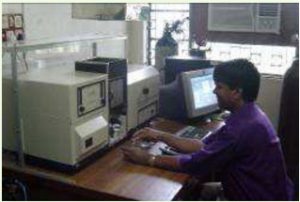 The meteorological observatory of the Regional Research Station is having all the necessary equipments for measuring standard weather parameters (Fig.3). Trained and experienced staff members of this station and IMD are engaged for recording and communicating the daily 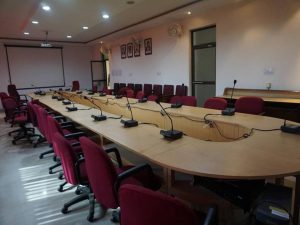 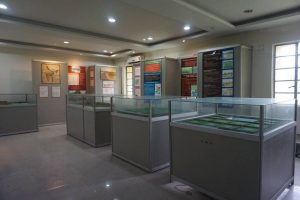 Museum: The station has a well designed museum (Fig.6) for exhibiting the technologies developed for management of coastal salt affected soils. Scaled models of different land shaping techniques are also displayed in the museum.

Characterization of coastal soils: Coastal soils of eastern coast perticulerly of West Bengal and Orrisa have been studied. Coastal soils of West Bengal (in the Ganges delta) are classified under different pH and salinity (Fig.4) groups. These soils are usually near neutral in reaction with varying salinity levels. The soil salinity shows highly temporal and spatial variability. The available nutrient status of the soils are: low in N, medium to high in P, high in K and micronutrients except Zn. 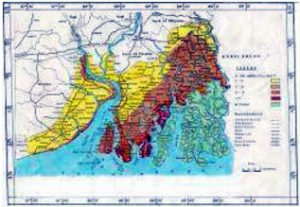 The soils are rich in soluble salts of Cl, Na+, Ca2+ and Mg2+ and K+ . The soils are usually heavy to medium in texture with moderate CEC and water holding capacity. The lands are gently sloped and typically characterized by its higher soluble salt contents in the rhizosphere, presence of brackishwater aquifer at close proximity to the surface and poor drainage condition. The soils are, in general, classified as Inceptisol and Entisol in the order level. Based on soil characteristics the location specific management.

Management of acid sulphate soil: Acid sulphate/ acid saline soils are present in the delta region of several major rivers in the coastal areas. These soils are highly under-utilized. Besides liming, higher doses of P-fertilizer is essential for proper management of these soils. Rock phosphate or locally available oyster shell (available in coastal region) along with green manures/ leaf manures may be used for achieving higher yield of crops on these soils. 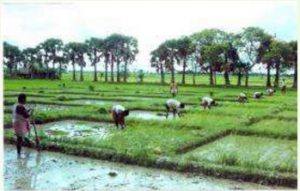 yield of crops was better when combined sources (organic and inorganic) of nitrogen were applied. Addition of Sesbania, Gliricidia, city compost and leaves of locally available trees alongwith inorganic N-fertilizer improved crop yield and soil health. Use of bio-fertilizers particularly for rabi/ summer crops was quite beneficial.

In case of acute damage of crop due to H2S excess Fe-fertilizer may be applied. A simple estimation for H2S released from rice field was developed as shown given in Fig.6. Production of methane (CH4) in rice field causing environmental pollution was found to reduce by application of Calcium Carbide encapsulated N-fertilizer. 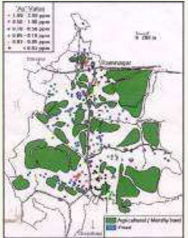 Managing arsenic contaminated water for irrigation: Ground water at shallow depth (<125 ft) at many locations in Baruipur block, (in coastal West Bengal) South 24 Parganas contains toxic levels of As (0.05-2.5 ppm), while surface water and underground water at depth >250 ft are usually free from arsenic (Fig 7.). Consumption of crops, particularly root crops and leafy vegetables grown on arsenic affected soil/water is harmful for human health. Soil rich in arsenic should be additionally fertilized with Fe or Zn to induce arsenic fixation, while application of P-fertilizer, organic manures and submergence of soil should be

Water of some of the shallow tubewells in Sunderbans region was found suitable (EC <2 dSm-1) for irrigation. Economic analysis indicated marginal profit from rabi/summer paddy cultivation irrigated with the tube-wells (Fig.8.) The economics of water use could be increased by cultivating crops other then paddy, which require less water

Thus ridges can be used for multiple crop cultivation and the furrows are useful for rainwater harvesting and fish cultivation along with rice (on remaining 50% of original low-land) during wet season.

During dry season the ridges continued to be used for vegetable/fruit cultivation. The remaining original fields are used for low water requiring field crops with the rain water harvested in the furrows. 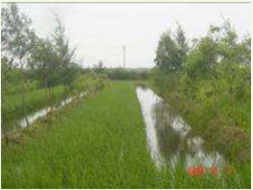 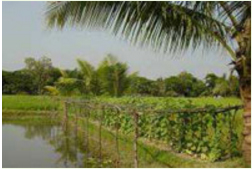 Soil water balance model developed for rainfed rice cultivation showed that about 20% of watershed/ farm area may be converted to OFR (Fig. 12) to harvest excess rain water for utilizing to grow crops in rabi/summer, supplemental irrigation in kharif and freshwater aquaculture. The dug-out soil was used to raise the land to form high and medium land situations for growing multiple crops including 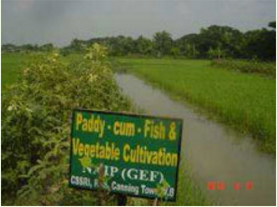 Trenches of about 3 m width X  1.5 m depth are dug around the field with a ditch of 6m X 6m X 3m(depth) at one corner. The excavated soil is used for making dikes of about 3 m width X 1.5 m high around the field to protect the fishes to be grown in paddy-cum-fish cultivation (Fig. 13). During kharif paddy-cum fish is grown on the original low land and vegetables on the dikes.

During rabi/summer low water requiring field crops & vegetables are continued to be grown on the dikes, and low water rquring crops on the original land with live saving irrigation given with rain water harvested furrows. Otherwise the original lands may also be used for brackish water fish cultivation. At the end of the summer season the brackish water is drained out with the help of pre-monsoon rains. The land is again used for Paddy-cum-fish cultivation.

Crop varieties: Eradication of soil salinity and amelioration require a large expenditure, which is difficult to afford. Therefore, manipulation of the genotypes is used to suit the existing soil and water constraints. The salt tolerant high yielding varieties of rice and other crops developed/ identified by this station. The promising rice varieties developed/identified for rabi/summer and kharif seasons are given in Table 1&2. 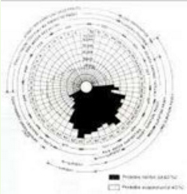 A crop calendar (Fig.14) has been devised accommodating a large number of crops considering weather, soil salinity, water requirement, etc. for crop production throughout the year. The crops to be cultivated in a perticuler area can be selected with the help of the crop calendar and depending on the soil salinity and irrigation water available